Headmistress, Mrs McKendrick has announced a number of new appointments for the next academic year to support the continued growth and development of every aspect of school life at Downe House.

Mrs Michelle Scott has been appointed Deputy Head in her 24th year at Downe House and having successfully led the international development, fundraising, admissions and marketing departments within the Foundation Office for the last 10 years. Taking over from Mrs Scott as Director of the Foundation Office and International Educational Development is Mr Alun Jones, former Head of Chetham’s School of Music and St Gabriel’s School in Newbury. Mr Jones is also a former President of the Girls’ Schools Association and a trained Schools’ Inspector. There have been further changes to the Leadership Team with Mrs Philippa Toogood taking over responsibility for the operational side of the School, examinations, inspection preparation and Learning Skills and moving into the role of Assistant Head. Mrs Judith Gilpin Jones (Head of Lower School), Mrs Anna Dourountakis (Head of Upper School), and Ms Mel Stimson (Head of Sixth Form), have also all become Assistant Heads for their respective sections.

On the pastoral side, two new Director of Boarding positions have been created in order to support Mrs Genevieve Ford, Deputy Head (Pastoral) and to further strengthen the boarding management team. Mrs Ellen Llewellyn will focus on Operations and Mrs Sofia McClymont will take responsibility for House Management. Both are experienced Housemistresses who truly understand the pastoral side of the School. Mrs Tara Reeve, who has been responsible for Prep Schools’ Liaison as well as being a Sixth Form Housemistress, has taken on the role of Director of Admissions.

Our new Head of Art is Mrs Kirsten Mortimer who has taught Art at Downe House since 2002 and worked closely with Mrs Sally Scott who retired this summer after teaching Art, and latterly leading the Art Department, for 35 years. Over in the ICT Department, Mrs Siobhan McClure has been appointed Head of ICT and Computing. Mrs Charlotte Jones joins us from Edgeborough School as Director of Pupil Progress and Mrs Isabelle Wallace takes on the position of Head of French from Rossall School in Lancashire. Our new Head of Academic Scholars is Mrs Maria Reichardt who combines this role with her teaching in the Modern Foreign Languages department.

In the Estates Department, Mr Dougie Brown has been appointed Head of General Services joining us from the British Army, and Mr Glyn Holdstock takes up the role of Head of Maintenance and Facilities, having previously worked for Shooting Star Children’s Hospices where he was Head of Facilities.

As part of the enormously successful Digital Strategy, which has seen the School awarded the status of Microsoft Showcase School for the third year running, three existing members of staff are taking on larger digital roles in order to support and move the Digital Strategy onto the next phase. Mrs Jane Basnett (Head of Modern Languages) is now also Director of Digital Learning; Mrs Katharine Henson joins her in the Digital Strategy team to become Director of Curriculum Administration and Digital Learning, and Mr Peter Webb will take on the role of Assistant Director of Digital Learning in addition to being Teacher of Physics and IT Co-ordinator for Science. The trio will become champions of this very important key development area of school life.

On behalf of all the staff, I would like to congratulate our colleagues on their new appointments, both at senior level and within every department. I am looking forward to working closely with all of them to take the School forward in line with our aims and ambitions over the year ahead.’ Taking Charge of Your Learning

In his latest blog, our Deputy Head, Mr Godfrey, discusses the path to independent learning with Downe House girls and teachers 'The Carol Services were truly uplifting. I couldn’t be more proud of the girls and the way in which they captivated the congregation with their inimitable warmth and integrity of choral blend, bringing the Christmas story alive.' Speaking in conversation with Teal and Honor, in front of a large audience of Sixth Formers, parents, staff and guests, Sir Max Hastings spoke with great candour about his wide-ranging career. On Thursday 18 November, the Upper Sixth pupils had the fantastic opportunity to hear from Jodie Gibbens, founder of Aesara Partners, a global executive coaching practice, and Downe House parent, through the DH LINKS programme. Downe House are delighted to have been included in the Cricketer Schools Guide 2022, named in the Top 20 All-Girls Schools for Cricket. "I gathered a group of Sixth Form girls in my office last Monday and grilled them about their experience of my own subject, English. The most important and emphatic message from the girls was how much they valued passion and enthusiasm from their teachers." On Wednesday 3 November, Downe House hosted a drinks reception for parents of pupils in the Upper Fourth at the Bluebird, Chelsea. The occasion provided an excellent opportunity to meet with other members of the community and share a superb evening. 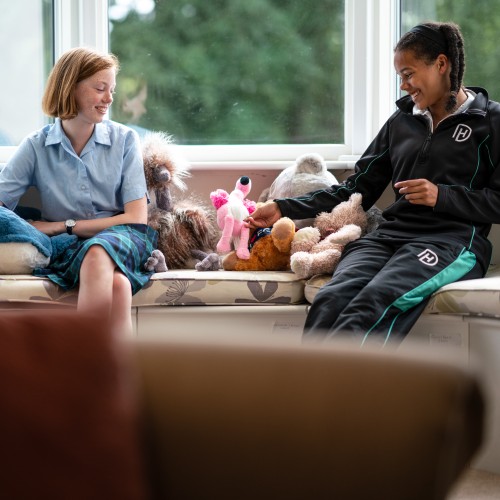 One of the most enjoyable and helpful things I did during my first half term at Downe House was to spend an evening in each of the boarding houses. I received a wonderful welcome in all of them. On a beautiful sunny Sunday afternoon in September, the Foundation Office welcomed back fifteen members of our alumnae from the Class of 1970 to Downe for their 50th Reunion. Smiles all around as Downe House sees individual and team success at the British Schools Biathlon at the University of Bath. Our very special, historical connection with Queensgate School dates back to the Second World War. In October, Mrs Alexandra Barlow and Mrs Jane Caiger-Smith enjoyed a wonderful visit to the School and many pots of tea were poured as they indulged in the nostalgia and imaging what it would have been like for those pupils all those years ago.