Through a contemporary and stimulating curriculum, girls acquire a knowledge of physical, human and environmental geography and develop an appreciation of issues facing the world now and in the future.

Geography is a compulsory part of the curriculum for girls in Remove (Year 7) to Upper Fourth (Year 9), after which it proves to be a very popular subject to follow at GCSE and A level, due in part to the specialist teaching, breadth of topics covered and the opportunities for exciting fieldwork trips. 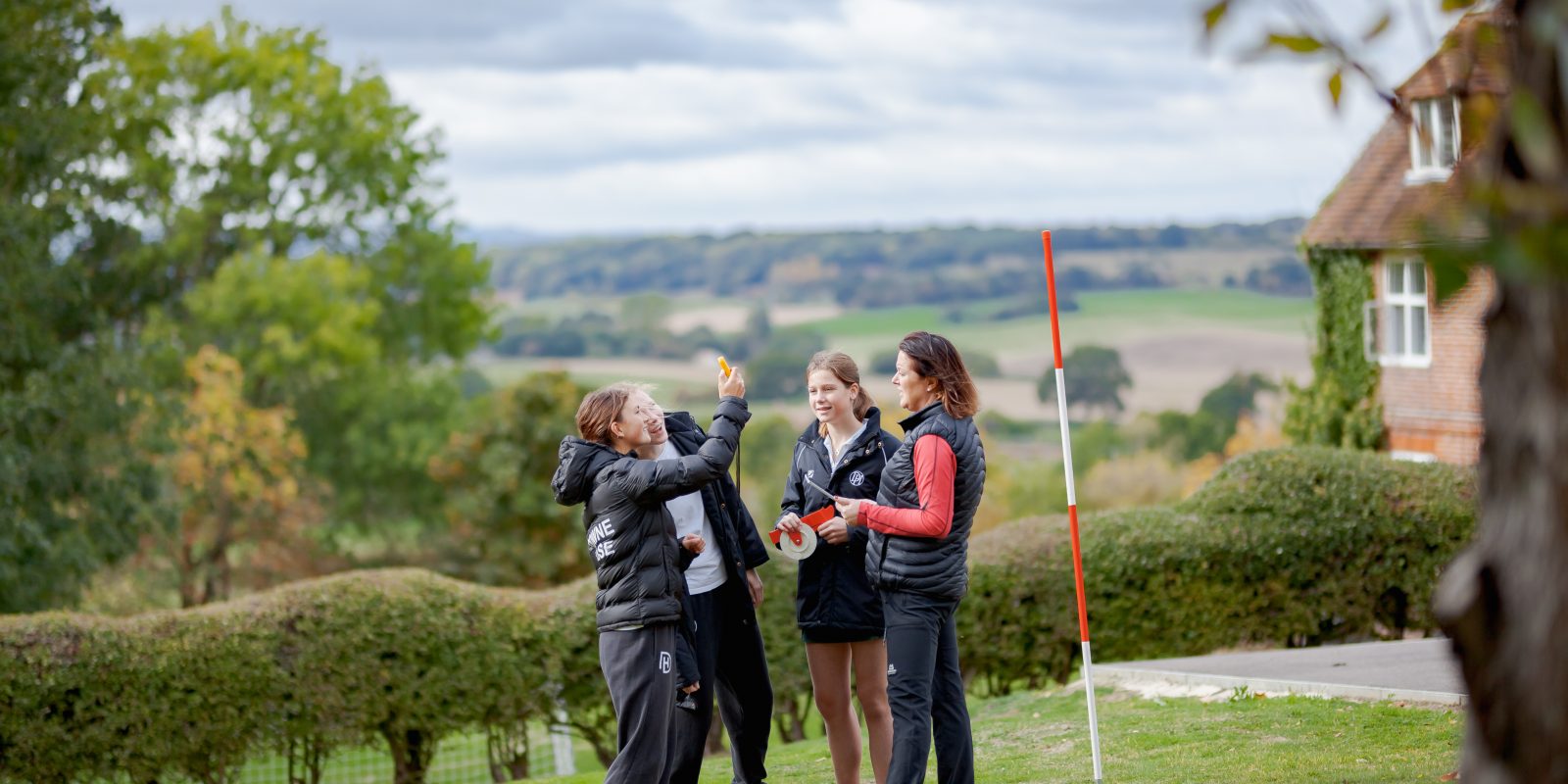 After an introduction to the subject in the first term of Remove, we explore human and physical issues in the UK including settlement and flooding. Throughout the Remove year, we build up the pupils’ geographical skills in map reading, graphicacy and numeracy.

In the Lower Fourth, we take a more systems-based approach and look at complex global issues including collapsing coastlines, population and migration. Girls look at issues from a range of perspectives in order to understand different opinions and how these can lead to conflict.

The Upper Fourth begin their GCSE studies with the topic of ecosystems, including tropical rain forests and cold environments. We also investigate the changing economic world with a focus on case studies of places with contrasting levels of development.

A balance of physical, environmental and human themes is taken further by pupils choosing to continue with Geography at GCSE. We have chosen to follow the latest AQA GCSE specification. Students in Lower Fifth study UK Landscapes, through the Rivers and Coasts options. They then move on to look at Urban Issues, where they investigate challenges facing urban dwellers and planners around the world. We finish the Lower Fifth with the Managing Resources topic, where pupils focus on the importance of conserving resources, with a particular emphasis on water management.

The Upper Fifth commence the year with the exciting topic, Hazardous Earth. In addition to Earthquakes and Volcanoes, pupils also look at the challenges that extreme weather creates.

The girls take part in a two-day residential field trip where they learn essential geographical fieldwork skills at an FSC Field Centre. This is to prepare them for their Paper 3 fieldwork paper.

In the Sixth Form, we follow the OCR Geography A Level course which provides a very good foundation for university. We begin in the Lower Sixth with Changing Places Making Spaces which is largely a study of urban environments and how humans interact with them. Students also study Coastal Landscapes and Natural Hazards. While in the Lower Sixth, the girls take part in a four-day residential field trip, in order to prepare for their Non-Examined Assessment (NEA). This project is devised by themselves and can be based on any area of the Geography curriculum that interests them. Our most recent field trips have been to Barcelona, where we have partnered with the Barcelona Field Studies Centre to create a bespoke field trip, that ensures the girls are fully prepared for their NEA which is worth 20% of their A Level.

Upper Sixth girls are given time to complete their NEA in class alongside lessons in the Geography of Health and Earth’s Life Support Systems. Earth’s Life Support Systems focuses on the importance of the Carbon and Water Cycle in Global Systems; while the Geography of Health looks at global patterns of disease and the issues presented by contagious and non-contagious diseases. Fieldwork is an important part of geography. The Geography Department has made sure that each year group has a chance to experience high quality fieldwork. GCSE pupils will visit Juniper Hall, a Field Studies Council Centre, in order to prepare for their fieldwork paper.

Our A Level pupils head to Barcelona to investigate coastal erosion and urban regeneration as a key part of their studies.

As well as this academic fieldwork, our geographers also have the opportunity to travel to Iceland, Costa Rica and Naples as part of optional curriculum enhancement trips.

The Geography Department is very pleased that an increasing number of girls are choosing degree courses in geography and closely related disciplines each year.

Any further information you require about the teaching and learning of geography may be obtained by contacting the Head of Department, Miss Kathryn Rawlinson;  Email: rawlinsonk@downehouse.net. Kathryn became a teacher in 2001 after working in industry for several years. She worked in the water industry for North West Water and the Environment Agency before moving to work in environmental consultancy for the oil industry. Here her jobs included conducting marine surveys of oil rigs and other offshore installations. Kathryn’s favourite job was working on improving the penguin pool at Edinburgh Zoo, where she got to dive with the penguins!

Kathryn’s interests include scuba diving (she loves diving with sharks and has traveled all over the world), open water swimming, kayaking, walking and mountain biking. Her favourite place in the UK is the Lake District, where she enjoys being in the mountains in her home the North-West of England.

Imogen has taught geography for over 20 years. She came to Downe House after working for eight years as Head of Geography at Queen Anne’s School in Caversham. Her first job was in London working at an inner city state school. From here she moved to the Willink School in Oxfordshire, where she taught for 11 years.

Prior to teaching, Imogen worked as a Stage Manager for a number of touring theatre companies. Imogen had lots of adventures, including living in a palace in Scotland and touring Holland and Belgium.

Imogen’s interests outside School include riding, dancing, skiing and watersports (in hot climates). Imogen loves to travel and have adventures, these include living on a kibbutz in Israel and has crossed the Sahara Desert in a truck! Imogen loves to pass on her passion for travel to the pupils she teaches and has organised many fabulous geography field trips to places like Iceland and Sicily.

Nicola loves the outdoors and likes to use the holidays to ‘broaden her geographical knowledge’. Her favourite destination so far is the West Coast of the USA, where she camped in Yosemite National Park and completed a 16 mile hike to the top of the Half Dome.  Nicola loves walking, particularly along rivers or the coast.

Claire arrived at Downe House in January 2017, where she took up a post as Assistant House Mistress in Hermitage House. She has since become Housemistress for Hill House. Prior to this Claire had worked as a geography teacher for 8 years at a school in Shropshire, where she had also been Head of Year 10 and 11.

Claire loves to travel, whether that be finding new places in the U.K. to discover or visiting new places further afield. Her favourite city is Aukland in New Zealand, where she enjoys the relaxed vibe and range of cultures. Claire’s family is from Southern Africa and as such is a place that she loves going back to.

Kate arrived at Downe House in 2015, where she became a full time teacher of Geography.  Kate also helps to run the Duke of Edinburgh expeditions with the DoE team.

Kate qualified as a teacher in 2006 and has taught in very different schools in Manchester and Oxfordshire. Prior to teaching full time Kate taught geography and biology field courses while coaching in kayaking, climbing, surfing and coasteering! Her clients ranged from 8-90 years old!

In addition to teaching, Kate has been chosen to participate and lead expeditions to the Arctic and Antarctic with companies including British Antarctic Survey. On these expeditions, she conducted various tasks including the collection of rare plant samples and penguin counts!

Outside of School, Kate uses her spare time to continue with her adventures. Her favourite environments are the mountains and coasts. She particularly loves Pembrokshire in Wales, where she enjoys kayaking, SUP, mountain biking, coasteering and hill walking.

Discover how we offer a tremendously broad and exciting curriculum at Downe House to inspire every individual.

Read more about the extensive academic enrichment programmes and opportunities we offer at Downe House.