A School with a Rich and Varied History

As we approach the 100th anniversary of Downe House’s arrival in Cold Ash, our archivist is keener than ever to share stories from the School’s past; from the eccentric ‘Giant’s Stride’ and iconic djibbahs, to the enigmatic and mysterious Miss Nickel.

Our School archive occupies a long, thin room perched on the first floor above the dining room. It is packed with memorabilia, photographs, artefacts and books, all lovingly curated by our hugely knowledgeable and dedicated archivist, Jane Caiger-Smith, who taught at Downe for 13 years before taking on her current role. As we approach the 100th anniversary of Downe House’s arrival in Cold Ash, Jane is keener than ever to share stories from the school’s past; and there is an appetite for them amongst our pupils, too.

“It’s fascinating to see how the School has adapted over the years, and also how some traditions remain in place,” says one of our UVI School Ambassadors, Freya. “When I give tours to alumnae they often speak with great fondness about the many familiar sights – the Cloisters, the Chapel, the Dining Room, the Oak Tree – and they are amazed by recent developments like the Murray Centre, too.”
“I think it’s important to explain the School’s history to pupils because it increases our sense of belonging and makes us realise we are part of something bigger than ourselves,” says Amelia, also from the UVI.

Here are just a few rich pickings from Downe House’s illustrious and often idiosyncratic past which Jane shared with me during a recent conversation: 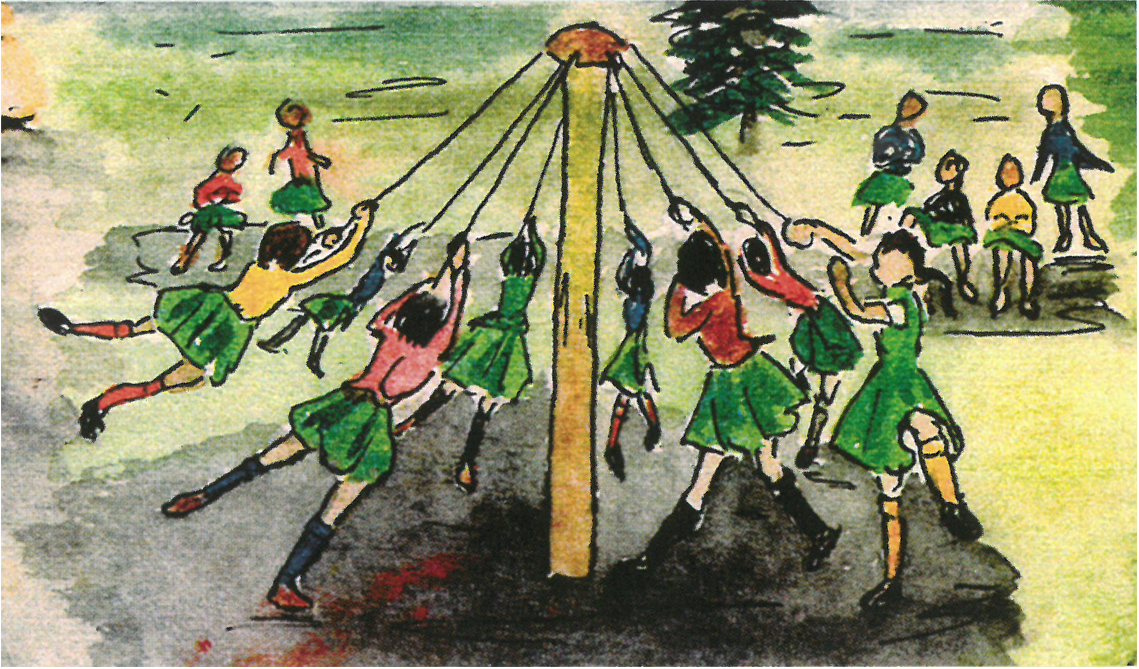 ~ One of the most eccentric items to have appeared on the current Downe House site was “The Giant’s Stride” – affectionately known as “Gianty” (pictured above) – which remained until the 1950s. Essentially, it was a tall pole with chains hung from it and ropes at the end of the chains. The girls ran around it, clinging to one of the ropes, eventually taking off using centrifugal force and rotating around and around the pole at tremendous speed and at a considerable height. It was clearly huge fun, although injuries from falling off and rope burns to the hands were common. There was no supervision. 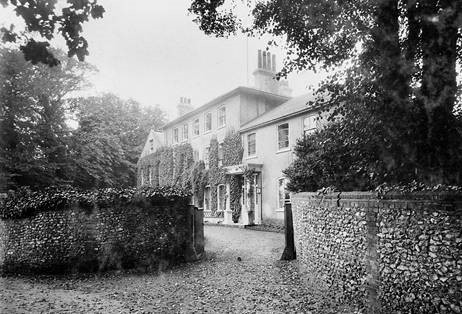 ~ The School’s first home was Down House in the village of Downe in Kent (see above), which had been the home of Charles Darwin. Under the founding headmistress, Olive Willis, it quickly became too small for the growing School. So in December 1921, Willis bought the current site – known then as The Cloisters Estate – from a religious order known as The Order of Silence, which had moved to Cold Ash from Devon. They built the site in 1912 but subsequently fell into financial hardship. Members of the order were required to dress simply in one colour only, often in white veils and robes.

~ Despite its extensive grounds – over 100 acres of woodland and open hillside with wonderful distant views – the buildings on The Cloisters Estate could not accommodate all the girls then enrolled at the School: there were only 36 bedrooms. Thanks largely to the remarkable and Herculean efforts of one very mysterious member of staff, Miss Maria Nickel (see below), the move to Cold Ash was accomplished during the Easter holidays of 1922 – although, initially, some girls had to sleep outside on canvas fold-out beds (one of which is in our archive). Records show that camp outs in the Cloisters during the warmer summer months were very popular with the girls. ~ Despite a long tenure at the School, no-one ever discovered anything about Miss Nickel’s background. It was rumoured that she was originally from Poland and had been brought up in Russia: astonishingly, she spoke 23 languages. She had a very odd appearance: she covered her head with a grey felt hat, and she always wore a very long, thick, brown, belted and stained overall with cigarettes in a breast pocket. At Down House in Kent, she frequently slept on the floor outside the Headmistress’s bathroom, seemingly because she believed it was good for her rheumatism – but most probably also because of her steadfast devotion Miss Willis. In Cold Ash, she continued to sleep, like a watchdog, close to Miss Willis – this time in the hallway of her house. Recruited initially as a teacher of geography, Miss Nickel soon became a chauffeur, architect, builder and handyman. She single-handedly designed and helped to build several new buildings at Cold Ash – and they were so sturdy that subsequent developers found them very hard to demolish. She had a softer side, too: she taught her pupils how to make delicious steak and kidney puddings and once – to everyone’s amazement – comforted a nervous new girl from Brazil by welcoming her in Portuguese. ~ All girls were expected to wear a djibbah as the main part of their uniform from the beginning until the 1970s. Miss Willis began her teaching career at Roedean School and copied the uniform from there. The djibbah was made of thick (and rather scratchy) wool with the School shield embroidered on the front. According to one alumna, “it was a matter of prestige to have an old and multi-patched djibbah”. The design had several advantages: they were practical for teenagers of all shapes and sizes; they had deep hems which were let down as the girls grew; and the girls were trained as seamstresses and encouraged to patch up the wool again and again as it wore out on hard school chairs. Apparently, locals were often baffled why girls from an expensive private school looked so scruffy, but the girls considered an old, time-worn djibbah as something to be worn with pride.

~ Occasionally, and on a whim, the School’s founding headmistress, Olive Willis, would announce a half-holiday – perhaps to celebrate a girl winning a place at a top university or simply some beautiful weather. Lessons would be abandoned at midday and the afternoon might be spent walking the four miles to Donnington Castle (and back again).

Our archivist, Jane Caiger-Smith, would be delighted to hear from anyone with information or stories about Downe House, and from any pupils or parents who might like to visit the School archive.