The latest in a series of global enrichment days for Remove, Germany Day provided the girls and their guests from Elstree, Papplewick and Ludgrove a fantastic opportunity to gain a better understanding of Germany’s culture, language, history and literature, past and present.

After a wonderful introduction to the German language by Headmistress, Mrs McKendrick who taught the girls and boys a few key phrases in German, the first presentation was on the topic of ‘Life as a Cold War Spy’ by Major General (retd) Peter Williams. Major General Williams spoke about his career in military intelligence and particularly his work in Berlin as a spy in the 70s and 80s. Downe House parent, Mrs McClintock also had real life experience of the Cold War during her childhood in East Germany and described her memories of the night the Berlin Wall came down.

Germany is home to many great writers and Teacher of English, Dr Atherton introduced one of the most influential German-speaking writers of the twentieth century, Franz Kafka. He explored the life and work of Kafka with particular reference to his famous short story, ‘The Metamorphosis’ in which the main character awakes one morning as a giant insect. History and Politics teacher, Mr Wise followed that with a whistle-stop tour through the key events and individuals who have shaped modern Germany, from the tribes of Germania under Roman occupation to the reunification of Germany and the present day. One of Germany’s most flamboyant historical characters was Emperor Frederick II and Head of History and Politics, Mr Lane described the life and times of Frederick the Great, a fearless warrior but a cruel leader with a passion for languages and falconry!

“I really enjoyed Germany Day because it opened my mind to a new nation and I learned about Germany’s history, culture and even what it was like living in Germany during the fall of the Berlin Wall. I enjoyed each presentation but especially the one given by Major Williams. His topic was his experience of being a Cold War spy. I didn’t know anything about this subject and so it gave me an insight to how hard a spy’s life could be because they had to be very brave but so careful that they didn’t make any silly mistakes. I enjoyed his talk because although it was a serious topic, he presented it in a humorous manner which made me want to listen. The Germany-themed lunch was also fantastic – it included frankfurter sausages and for pudding, we had a delicious black forest gateau. Overall, I really enjoyed the day and I found all the talks extremely interesting.”

Germany Day ended with a ‘Stereotypes Workshop’ run by Head of French, Mr Perdikis in which pupils enjoyed a trio of tasks to familiarise pupils with different aspects of German culture. Thank you to all our speakers who gave such interesting and lively presentations helping to make Germany Day such a success and to the Catering Department who gave us a mouth-watering introduction to German cuisine.

View the photos from Germany Day 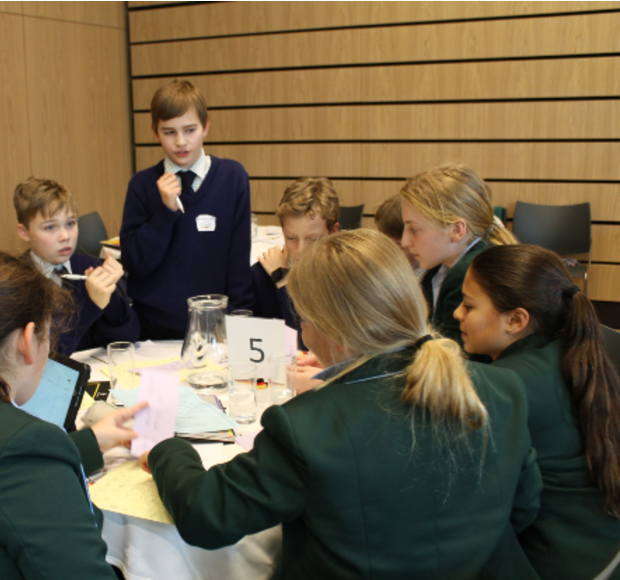