The Downe House Murray Centre and English Department brought the Festival of Literature to School in March. Celebrating the joys of reading and writing with guest speakers, workshops and so much more! ‘A book is a dream that you hold in your hand.’ – Neil Gaiman

From the 15 – 18 March, the Murray Centre became the backdrop for a wonderful Festival of Literature. The bunting was hung, flags fluttered outside, a local bookshop, moved into the Collaboration Space. The whole community came together to celebrate all things literary.

Pupils throughout the school experienced an exciting and enriching timetable of events. The Lower Fifth and Upper Fifth attended workshops hosted by Three Left Feet, a Lancaster-based theatre company, who brought their GCSE Shakespeare texts to life. Remove and Upper Fourth pupils enjoyed a series of creative writing workshops brought to us by writers from our local Watermill Theatre. Also, Sixth Form English students enjoyed an insight into theatre life from one of their casting and production staff. Alongside these, Revolution Performing Arts ran workshops on finding your voice.

‘I loved all of the different workshops, because the people running them were amazing! The authors who came to speak to us were also really cool, and listening to them speak was really inspiring and enjoyable.’ – Pupil 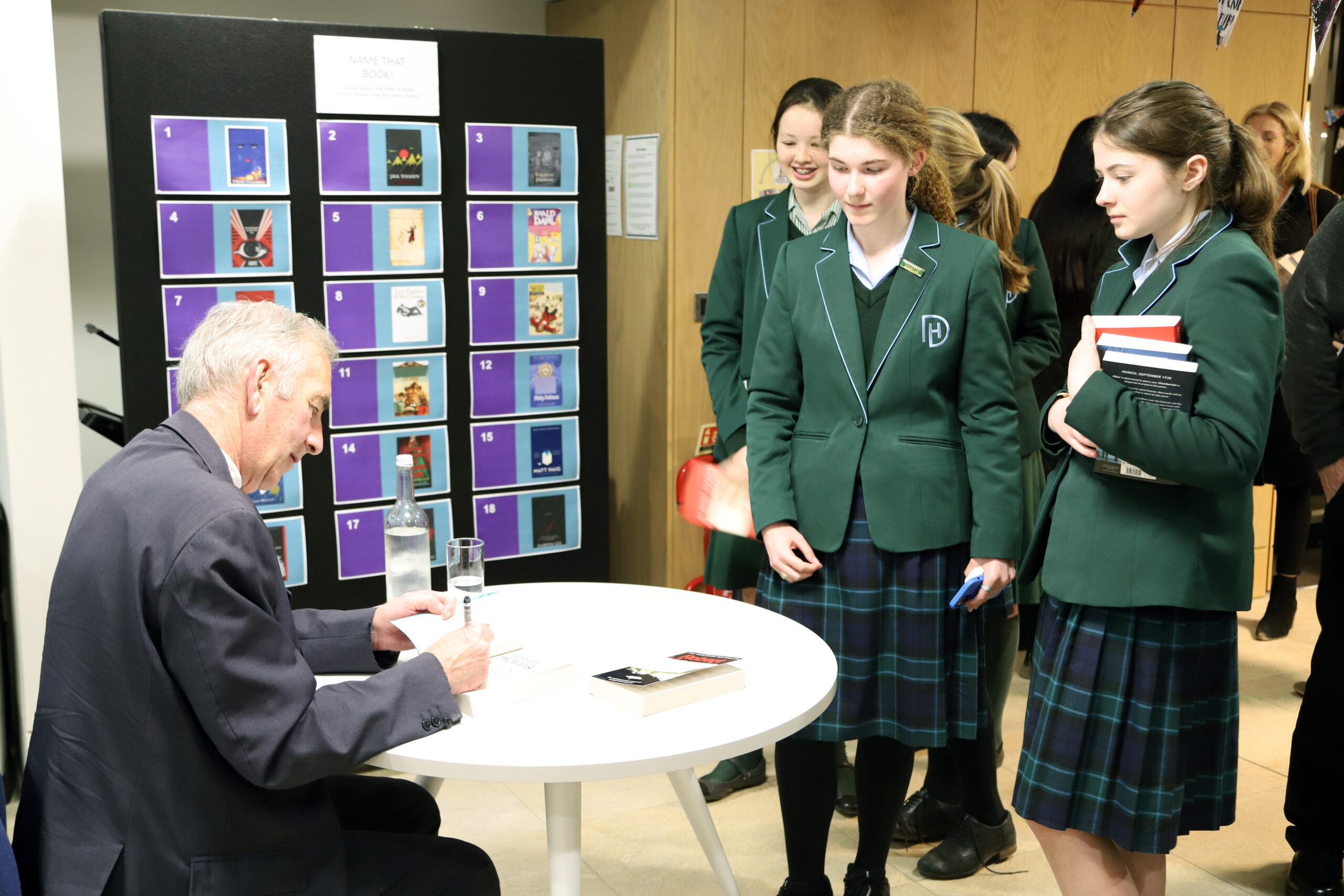 We were treated to a visit from Performance Poet Giovanni Esposito or Spoz. Spoz entertained us by sharing his own compositions, with one composed on the spot! He also got everyone writing and performing their own raps on the subject of chocolate. Great fun!

Every lunchtime, our brave and talented English staff shared readings from their favourite texts. Readings included passages from Pride and Prejudice, Oliver Twist and Henry V to the great enjoyment of the gathered crowds. Louisa G (UVI) shared extracts from one of her favourite poets, Douglas Dunn.

‘The talk by Robert Harris was by far the best part for me. I really wasn’t expecting to enjoy Robert Harris’ talk as much as I did but it was so interesting – and I had my book signed by him after the talk!’ – Pupil

The undoubted highlights of the week were the evening events when we were visited by some of our most popular authors. On Tuesday, we were very excited to welcome best-selling political and historical thriller writer, Robert Harris. He was expertly interviewed by one of his biggest fans, Tacita R (UV). This was a most entertaining evening, well attended by pupils, staff, alumnae and parents. It was followed by a book signing which kept our guest writing for over an hour!

On Thursday, we welcomed teen authors Holly Bourne and Lisa Williamson who shared their love of writing with the Upper School. Once again, one of our pupils, Sophia S (LV) did a superb job hosting the evening and, although Holly was unable to join us in person, thanks to the expertise of our AV department, the conversation flowed freely from screen to stage!

Our final evening event was with two popular authors amongst our Lower School readers, Karen McCombie and Nicola Penfold. The event was live-streamed to our Lower Fourth pupils in Sauveterre and we also welcomed some of our families who will be joining Downe House in September. Karen and Nicola interviewed each other and also treated us to a reading each from one of their books. It was lovely to see how engaged our Lower School students were – the Q&A at the end could have gone on all night! ‘My favourite part was definitely the bookshop! The hidden books around school were also a really lovely idea, and the lunchtime readings in the Murray Centre were great for bringing people together and added to the ‘festival’ atmosphere. I also loved the interaction we were able to have with the authors after their talks.’ – Pupil

Throughout the week, we were very lucky to have a bookshop on site, hosted by our local award-winning independent Hungerford Bookshop. It was a real treat for pupils to be able to take the time to browse and choose their own books from a wide-ranging selection on offer, including books from our festival authors. Open from 10am until 5pm every day and staffed in the afternoon by our own Literary Seniors and friends, it was hardly ever without a visitor with orderly queues forming at the checkout during breaks and lunchtimes! Possibly the most popular element of the festival was a daily hunt around the site for brown paper parcels which contained brand new books – a gift for whoever could find them. In addition to all of this, there were competitions to enter, a 1940s vintage typewriter on display where pupils could add sentences to a story and lots of daily quizzes, crosswords and even a Shakespeare jigsaw puzzle to complete.

‘There is no doubt that Downe House is a community that understands the value of books and reading and our Festival of Literature 2022 was a true celebration of that. We are looking forward to bringing it back to School again in 2024!’ – Mrs Hill, Learning Resources Manager