Diaries of Global Exchange students in the Netherlands

Each of the 16 partner schools in the Global Schools’ Exchange Programme offers a very different experience. Although it is the closest partner school in distance to Downe House, Dr Nassau College certainly offers a world of cultural differences and an opportunity to experience the rightfully famous Dutch hospitality. Two Lower Fifth students visited Dr Nassau College in the city of Assen to spend a week immersed in Dutch life at Easter.

Their first few days were spent with their Exchange Buddy’s families over the weekend. Tilly said, “When we left the airport, my Exchange Buddy, Anna and I went straight to Zaanse Schans which is famous for its windmills and typical Dutch housing. All the buildings and windmills were painted in the same green colour as our uniform. On the Sunday, we went to an island called Ameland which was beautiful, and, despite the wind, we went riding on the beach which was wonderful. On the way home we stopped at a bakery and ate tompouce which is cream with pastry and icing – it was delicious.”

Ayanfe also visited the Zaanse Schans and the Keunkenhof Gardens with her Exchange Buddy, Emma before travelling on to the Hague where they visited Noordeinde Palace, the King’s official residence, and the Peace Palace which houses the International Court of Justice. Here they saw the world peace flame surrounded by rocks from 196 countries around the world. Tilly and Ayanfe report on their trip,

“On Monday, we had our first day at Dr Nassau College. It was so different to Downe House, however just as welcoming. Everybody had a chance to test out their English on us and we were very impressed with their efforts. We both had Technasium on Tuesday where we saw a drone that some of the Sixth Form students had made which was absolutely incredible.

We visited the University of Groningen where most of the students from Dr Nassau were going to go. I visited the English and History section of the University which was right in the centre of the city and Ayanfe went to the Science faculty. The architecture was beautiful, and the lectures were fascinating.

Whilst in the Netherlands, we were amazed at how many people were using bikes as a mode of transport and the extent to which cycling is embedded into Dutch culture. We also enjoyed a variety of delicious Dutch food and snacks. Some of my favourites were Stroop waffles and Poffertjes, which are Dutch mini pancakes which you can have with a variety of delicious toppings.

On our final day, we took the train to Amsterdam with Anna and Emma. When we arrived, we went straight to the Rijksmuseum which was stunning. We saw the Battle of Waterloo, The Milkmaid and finally The Nightwatch painted by Rembrandt which was a truly fascinating experience. We ended our trip with a canal tour and learnt that Dutch houses were priced by the width of the front of the house which is why all the building are so narrow.

It was such an eye-opening experience and we are thankful for having the opportunity to spend time getting to know Anna and Emma as well as their families and friends. We very much hope to see them again soon when they visit Downe House.” 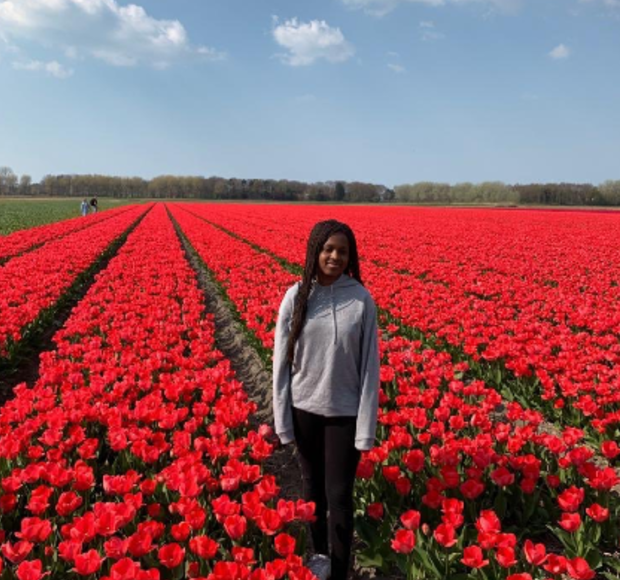 Find out more about the Global Schools’ Exchange Programme